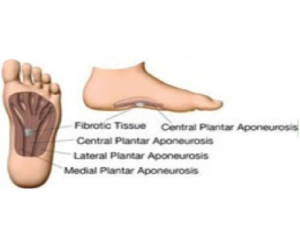 Plantar fibromatosis is a fibrotic tissue disorder which is characterized by the presence of excess collagen or fibrotic tissue. The most common symptoms of plantar fibromatosis are the dense, firm nodules that can be felt just under the skin on the bottom of the foot. The nodules are painful with standing or walking and do not resolve on their own. Cells known as fibroblasts are responsible for the production of the primary components of plantar fibromas such as collagen, fibronectin and glycosaminoglycans. Research has shown that the process by which these components are released out of the fibroblast requires calcium. There are several mechanisms topical treatments target to treat plantar fibromatosis. The first allows for the progression of the condition to be slowed or stopped and second for the fibroma to actually be reduced. The remodeling of this tissue allows for the discomfort and the fibroma to be reduced or eliminated.

Topical creams allow for noninvasive treatment, decreased systemic effects, and consistent, constant treatment at the direct site of the fibroma.

Verapamil is a calcium channel blocker. Research has demonstrated that it has the ability to increase the activity of collagenase, which enhances the remodeling of scar (fibrotic) tissue, increase procollagenase activity, and therefore increase collagen breakdown. Topically, verapamil has the ability to remodel an already formed and stable fibroma into more healthy tissue.

Diclofenac is an anti-inflammatory (NSAID). NSAIDʼs have been shown useful in treating plantar fibromatosis but are often limited on the duration of use due to gastrointestinal or cardiovascular effects. Topical formulation allows for consistent use without these concerns.

Baclofen , a GABA derivative, is used to reduce spasms and cramping.

Bupivacaine acts as a local anaesthetic.
Mometasone is a glucocorticosteroid used to reduce inflammation. Steroids have been used in various formulations and vehicles to treat plantar fibromatosis.